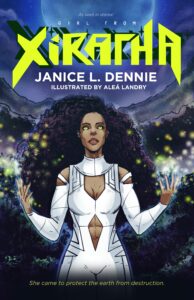 Eris is a female humanoid from planet Xiratha near the tip of the Little Dipper in the Ursa Galaxy, light-years away from earth. What is most unusual about Eris are her brilliant green eyes that glow when using her X-ray vision. She can also speak any language she hears, and she uses her powers to heal and see the future. Emperor Norcemo, leader of the Ursa Defense League (UDL) on Xiratha, trains Eris, Firebird, and Star Angel, to use specialized weapons along with their powers to protect the Ursa Universe and beyond. After training them, Emperor Norcemo sends Eris to earth to protect the humans from an attack by the Dark Chis. If you like fights between female superheroes and alien creatures like the Amazons in Wonder Woman, and the Dora Milaje in Black Panther, you will like this comic book!

Xiratha’s green glow derives from large malachite crystal deposits covering its surface. The crystals give Xirathians powers such as extrasensory perception (ESP), the power to heal, see the future, and other skills based on their character.

Xirathians are peacekeeping humanoids responsible for maintaining harmony and peace among the planets within the Ursa Galaxy and beyond. Initially from the planet Dubhe, Xirathans ruled there for five thousand years until their world fell under the invasion of the Dark Chis–alien creatures that travel celestial bodies to destroy life on planets and consume their natural resources. The humanoids fled Dubhe and landed on Xiratha, gaining superpowers from the planet’s mystical green malachite crystals.

Print book – Available via Paypal below.