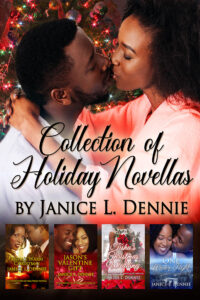 FOUR NOVELLAS:  1. TISHA’S WARM CHRISTMAS. Tisha Underwood longs for a significant other to keep her warm during the holidays. She visits her great aunt Henrietta Underwood in Napa, California, where she meets handsome Trevor Howard at the Poppy Hill restaurant next door. Trevor stops in his tracks when he sees Tisha walk through the door. He looks her over and likes what he sees—a shapely woman with a creamy cocoa complexion, black satin eyes, and long black hair braided down her back.  2. TISHA’S CHRISTMAS WEDDING. Tisha returns to Napa Valley to visit her boyfriend, against her father’s wishes. Trevor has patiently helped Tisha overcome her fear of marriage and asks her to marry him. Problems arise when Tisha’s best friend, Megan, holds a grudge, and Tisha’s parents reveal a horrific family secret that causes Tisha to fall back into her fear of marriage. As the wedding date approaches, what else could go wrong? Everything!   3. JASON’S VALENTINE GIFT. Jason Underwood returns home from Afghanistan only to find his girlfriend happily married to another man. He visits his cousins in California and realizes the airline has misplaced his bag containing his pain medication. He visits the local VA hospital, where Nurse Amber Carrington threatens to crack his icy swag.   4. ONE WINTER NIGHT. Veronique Sutton gives up on finding her significant other until one winter night when she attends her company’s Christmas party and meets two handsome associates. The sincere (and wealthy) Christopher Steele and the vibrant (and fiery) Jamal Stone. Both appear to offer Veronique everything she wants in a man, but both are as different as night and day. Will she make the right choice?