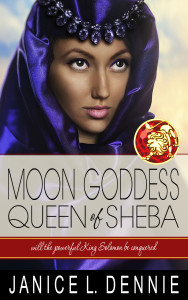 In the tenth century BC, Princess Makeda grieves as invading warriors storm through her beloved Sheba, forcing her to seek a political alliance…And she suffers humiliation by the handsome King Solomon who would offer her marriage in exchange for protection.  Even though she fears being cast into his harem of seven hundred wives, she aches to know the rapture of his tender kiss.

For the first time ever, powerful King Solomon has been conquered, and by the defiant and beautiful Queen of Sheba. He must have the sensuous enchantress who resists his remedy for the alliance she seeks. And he will risk life itself to protect the woman who has pierced his heart with a tender love that he cannot deny.

Amazon.com 3 of 4 people found the following review helpful 5.0 out of 5 stars Manna from heaven, April 18, 1999 By A Customer This review is from: Moon Goddess: The Queen of Sheba (Mass Market Paperback) In 950 BC Ethiopia, a numbed Princess Makeda wanders among the sea of dead bodies, including her mother, Queen Zenobia, that flood the floor of the courtyard. Makeda has no time to grieve as she is now the Queen of Sheba and must find a way to protect her people and their wealthy lands from the invading tribes who covet them. Her foster uncle sees only one avenue of safety for their people. He suggests that she propose a marriage alliance with the legendary King of Judah Solomon. When Solomon and Makeda meet, they fall in love with each other. Solomon, whose harem is estimated at seven hundred women, has never lost his heart before. However, he knows that though he loves this pagan, his tribe would never accept her as the queen of the Jews. Still, when an unknown assailant tries to kill his beloved, he vows to protect her even though he suspects one of his own as the culprit. MOON GODDESS is a fabulous retelling of the biblical romance between Solomon and Sheba. The story line is fast-paced and filled with a genuine feel for the era. The characters seem genuine without losing or changing what the bible describes of them. Janice L. Dennie demonstrates she is a major talent within the biblical historical fiction sub-genre. Fans who relish a wonderful love tale from out of the Old Testament will want to read this novel and its predecessor (see THE LION OF JUDAH). Both novels contain entertaining, well written, and exciting tales. Anyone who does will be a fan of Ms. Dennie and clamor for an early release of book three, MENELIK THE CONQUERING LION. Harriet Klausner 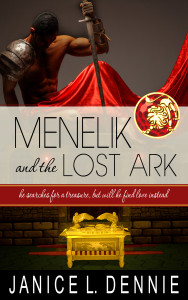 Menelik, son of King Solomon and the Queen of Sheba, unknowingly transports the Ark of the Covenant from King Solomon’s Temple in Israel to Axum, Ethiopia. At Menelik’s coronation as Ethiopia’s first king, he hears that the powerful Nubian Pharaoh has attacked his Red Sea border city of Adulis to take over his lucrative trading route. Menelik uses the mystical powers of the Ark of the Covenant to strengthen his warriors to oust the Nubian invaders. After the dust has settled, he finds that his heart has been captured by the beautiful Princess Zula.  He must have the sensuous princess who is sworn to his destruction. He will risk life itself to nurture a passion born in the heat of hatred and war.

Princess Zula of Adulis fights the Nubian warriors as they storm through her beloved port city. Menelik is the last man standing, when her father is killed before her eyes.  She burns with hatred for the handsome warrior—yet she aches to know the passion of his kiss.