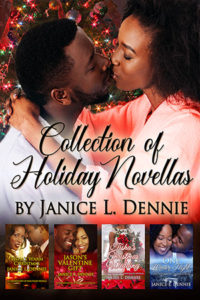 “Collection of Holiday Novellas by Janice L. Dennie,” include “Tisha’s Warm Christmas,” “Jason’s Valentine Gift,” “Tisha’s Christmas Wedding,” and “One Winter Night.” In “Tisha’s Warm Christmas,” Tisha Underwood visits her great aunt in Napa Valley for the Holidays. While there, she meets handsome, hardworking Trevor Howard, who works toward owning a restaurant. In “Jason’s Valentine Gift,” Tisha convinces her brother, Jason Underwood to accompany her to visit their relatives in Napa California. Upon arrival, Jason meets Nurse Amber Carrington, who threatens to crack his icy exterior. In “Tisha’s Christmas Wedding,” Tisha and Trevor Howard overcome serious issues in their relationship and Trevor asks Tisha to marry him. Tisha’s best friend, Megan, holds a grudge, and Tisha’s parents reveal a horrific family secret. As the wedding date approaches, what else could go wrong? Everything!

In “One Winter Night,” twenty-nine-year-old, Veronique Sutton, makes another bad choice. She gives up on finding her significant other…, until ONE WINTER NIGHT, when she meets two handsome colleagues at her company’s Christmas party. The sincere (and wealthy) Christopher Steele and the vibrant (and fiery) Jamal Stone. Will she make the right choice?

(A Suttons of San Francisco Novella) 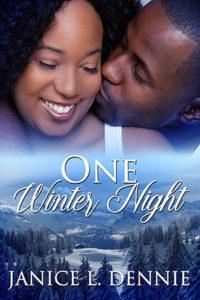 Veronique Sutton’s mother has warned her to marry before she turns thirty if she wants to have children because menopause runs early in their family.  The gorgeous 29 year old, looks like she just stepped out of Hollywood. Her only dilemma is that she expects the same of the opposite sex. The man she loves must be tall, handsome, upscale, and professional. And he must make her feel fire and passion. No lukewarm love for her.  Veronique knows how to attract a man, but she doesn’t know how to keep one so she gives up on finding her significant other…, until One Winter Night, when she meets two handsome men at her company’s Christmas party. The sincere (and wealthy) Christopher Steele and the vibrant (and fiery) Jamal Stone. Both are handsome, upscale, professional men and both are as different as night and day. Only one can help Veronique make the right choice for her future happiness. Which one will it be? 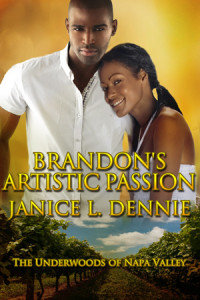 Brandon Underwood, is one of the hottest artists in the San Francisco Bay Area who has lost his passion for painting. His world is turned upside down when he displays some paintings at an art show full of attractive women, and one woman in particular. She’s tall, slim and smells of orange blossoms. He lives a solitary lifestyle communicating through his art. When it comes to love, Brandon’s heart is as complicated as his art. He’s searching for the ideal woman, but his relationships tend to fizzle out when he finds flaws with his love interests. Ciara Alexander is an ambitious principal ballerina at the Delores Brown Ballet Company.  She wants to join the San Francisco Ballet, but competition is stiff.  After seeing Ciara dance, Brandon’s passion for painting erupts into a masterpiece portrait of a ballerina wearing a red tutu and a purple feather in her hair.  He entitles the painting “Ciara.”  Now that he has regained his passion for painting and found his ideal woman, will Brandon accept Ciara flaws or ruin his chance at happiness? Will Ciara’s blind ambition become more important to her than a loving relationship with Brandon?

Unemployed chef, Briana Rutledge inherits a cottage on one thousand acres of land in California’s Napa Valley Wine Country making her a millionaire. She sets out to turn the cottage into her dream restaurant.Others have agendas to destroy Briana and prevent her from opening her restaurant.

The Underwood brothers have inherited their grandfather’s DNA of protecting women and children. As the eldest brother, vintner, Kenton Underwood, has been betrayed and no longer believes women need his

protection. He has no room for love until he meets sexy, understated Briana Rutledge who finds a special place in his heart. But Briana harbors a deep seated fear that prevents their future happiness. Kenton has also been scarred by an obsession that fuels his competitive behavior. Can their relationship survive Kenton’s obsession and Briana’s fear? 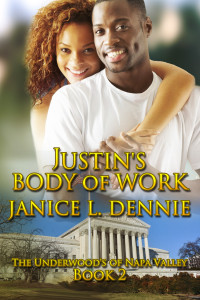 Ashley Jacobs, relishes in providing her customers at her day spa with a tranquil and healing environment. Maintaining her peace of mind, and creating harmony within herself come before anything else in the world. She wants to expand her successful business by adding more stylists and massage rooms. But her plans become completely stalled when she is suddenly hit with a vicious lawsuit from a someone she leasts suspects.

Justin Underwood is a young, hotshot attorney with a stellar resume. His body of work consists of winning equal rights, equal pay, sexual discrimination, and domestic abuse cases. He takes greatpride in fighting for those who cannot fight for themselves in the court of law. As the second oldest Underwood brother, Justin has been dubbed “the strong one” of the family. He is a realist who deals in facts, but after years of arguing stressful cases in court, Justin has become weary. He seeks relief from his stressful lifestyle at Ashley’s Day Spa. The moment he hears Ashley’s soothing voice, he feels like he’s floating on air. He finds peace simply by being in her presence and is hopelessly drawn to the sexy woman with the slanted bedroom eyes. But Ashley has been scarred by a family secret and is unable to totally commit to Justin. She coasts along, with her head in the clouds, turning a blind eye to her legal problems. Can Justin open Ashley’s eyes and get her to face the facts about her lawsuit and get her head out of the clouds? Can Ashley let go of her family skeletons, and open up to the man who loves her? 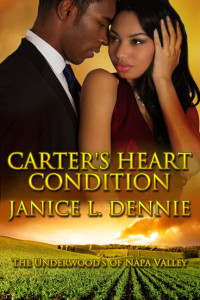 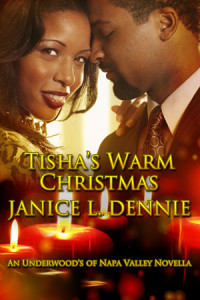 Tisha Underwood returns home to Dallas from visiting her boyfriend in Napa, California. 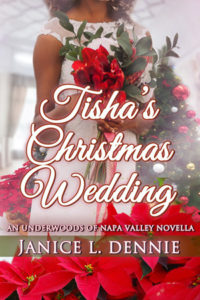 She dreads giving her father the news that her boyfriend, Trevor Howard, has asked her to marry him. Her father refuses to bless her marriage to Trevor, but Tisha has waited a long time for the right man. She ignores her controlling father and starts a new life in California. While planning her wedding, Tisha realizes how different she and Trevor are from each other. Trevor’s male pride prevents him from allowing Tisha to pay for the wedding from her hefty trust fund. Trevor wants to live in his small apartment and have a small wedding so he can save money to open a restaurant. But Tisha has her heart set on having a big wedding and living in an expensive subdivision, where her cousins live. The big day nearly falls apart, after Tisha buy the house of her dreams. Will Trevor allow his male pride to ruin his future with Tisha? Will Tisha’s privileged lifestyle stand in the way of marrying the man she loves? 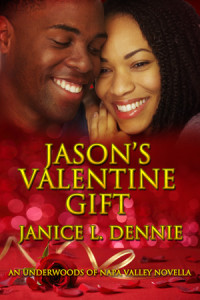 Jason Underwood returns home from Afghanistan only to find his girlfriend happily married to another man. To help him get some rest, Jason’s sister, Tisha convinces him to accompany her on a vacation to Napa, California to visit their relatives. Upon arrival, Jason realizes the airlines has misplaced his bag containing his pain medication. He visits the local VA hospital where he is treated by Nurse Amber Carrington, who threatens to crack his icy exterior. But Jason is determined not to allow another woman past his carefully guarded heart. Amber Carrington is on a mission to heal as many veterans as possible after losing her ex-boyfriend in Afghanistan. To Amber, Lieutenant Jason Underwood comes off as a bossy, commando type of soldier, used to barking out orders to his subordinates. But she’s accustomed to that kind of behavior from her patients, and sees through Jason’s tough exterior. She sees a man who, like her, suffers from a broken heart. Will Jason allow Amber to heal his wounded leg as well as his wounded heart? Will Amber overcome losing her ex-boyfriend? 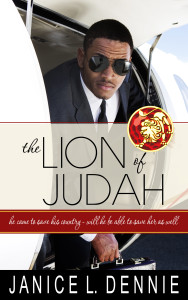