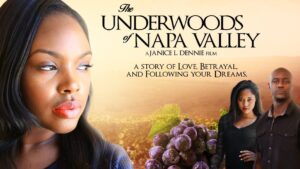 THE UNDERWOODS OF NAPA VALLEY

The Underwoods of Napa Valley is a ninety-minute feature-length film based on Janice L. Dennie’s novel, Kenton’s Vintage Affair part of her Underwoods of Napa Valley book series. Vintner, Kenton Underwood is protective of his family and environment in the bucolic town of Napa, California. He fights an uphill battle of balancing his personal issues, complicated love relationships, and obstacles to his career in the competitive Napa Valley wine industry, all while striving to protect his family in the city he calls home. Unemployed chef Briana Rutledge inherits a cottage next door to the Underwood winery. She longs for a family, but because of personal issues she fears love, so she focuses on her career and her dream of opening a restaurant specializing in South Carolina Low Country cuisine. Kenton’s ex-girlfriend, Tiffany Young is a spoiled Daddy’s Girl who doesn’t care who she hurts as long as she gets what she wants. Restauranteur, Nathaniel Young, Tiffany’s father, plots to run Briana out of town because her restaurant is too close to his.

Henrietta and Frank Underwood worked as sharecroppers in Waco, Texas before moving to Napa, California during the Great Migration in the fifties. They made a modest living growing corn and then switched to growing Cabernet grapes in the eighties. They became independently wealthy after opening Underwood Hills Winery. Although Frank has since passed away, Henrietta has turned over the running of the winery to her eldest grandson, Kenton Underwood.  Henrietta’s focus these days, is on marrying off all four of her adult grandchildren to loving spouses, beginning with Kenton. She’s dubbed each one with a character trait.

KENTON UNDERWOOD, is “the protective one.”  Protective of his family, Kenton stays busy producing award winning wines while running the family winery and competing with vintners from local and international wineries.

JUSTIN UNDERWOOD, is “the strong one.” He’s a passionate civil rights attorney and a modern day knight in shining armor who fights to protect the woman he loves in court.

CARTER UNDERWOOD, is “the gifted one.”  He’s a brilliant, self-centered Silicon Valley billionaire who has suffered burnout and returns home to get a new perspective on life. He’s used to controlling his time, money and heart until he meets Courtney Oliver, the former “Miss Oakland” who makes him realize his heart has a mind of its own, and he can’t tell it who to love.

BRANDON UNDERWOOD, is “the artistic one.” He has lost his passion for painting until he meets Ciara Alexander, an ambitious ballerina whose biological clock is ticking. She must choose between her successful career, and the man she loves.